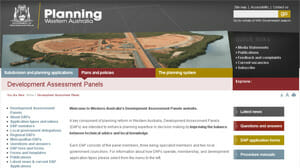 From 1st July 2011, certain Development Applications will no longer be reviewed by the Local Government or WA Planning Commission. Instead, your application may be reviewed by a LDAP or JDAP.

TBB can help guide you through the Application process. Begin by reading this brief overview, then give our team a call.

What is a DAP?

Their decision-making powers are constrained by the existing planning framework for the local government area subject to the application. DAPs comprise a mix of technical experts and local government representatives with the intent of providing an independent decision maker which is able to more effectively consider the technical aspects of an application, in addition to local concerns and interests.

Local vs. Joint – LDAP vs. JDAP

All DAP members are appointed by the Minister for Planning, and each DAP consists of five panel members:

In addition to this, two deputy members are nominated from local government to be called on if an issue of quorum arises. Alternate members are also appointed and may step in where the appointed member is unable to act.

All DAP members are appointed for a maximum term of two years.

There are three types of DAP applications, each determined by value thresholds

Construction of any or all of the following applications is excluded from DAP determination:

DAP fees are in addition to local government application fees, and are determined by the monetary threshold of the application being assessed.

Appeals of any DAP decisions will be made to the State Administrative Tribunal (SAT), where DAP will be the respondent. This includes applications delegated to a DAP, and deemed refusal applications.

Applicants may make a request to brief DAP members on an application and engage in a site visit, however  contact with individual DAP members or lobbying in relation to existing or potential applications is not permitted. All requests for a briefing or site visit should be made through the DAP Secretariat at the Department of Planning, who will then direct the request to the Presiding Member.

All DAP meetings are open to the public, but should an applicant wish to make a presentation to the DAP they are required to complete a DAP Presentation Request Form. This must be forwarded to the DAP Secretariat at least 72 hours before the meeting is held.

Additional information on the topic of DAPs can be found on the WAPC website: