our logo stems from the past, explores the present, and imagines the future

a tapestry through time

It was October 1969 when Bill Burrell and Russell Dalton Taylor first established the planning and urban design firm which today we know as Taylor Burrell Barnett (TBB). Throughout the years, the TBB logo has told a story of a philosophy, a vision, a purpose and a commitment.

In 1970, Ken Cato established Cato Brand Partners in Melbourne. His work has earned him an acclaimed international reputation and 16 global offices. He has developed some of Australia’s most iconic brand identities including the Qantas, Commonwealth Bank, Macquarie Bank, Channel 7, Coles supermarkets and SBS logos and of course was fundamental in creating the Taylor Burrell logo in the mid-1990s, collaborating closely with Bill and the other Directors.

Bill found Ken to be of a like mind, a perfectionist and strategist and fellow design professional. Ken worked with the partners at the time to formulate the early logo design in the 1990s and a decade on, in the mid 2000s, they joined forces again to work through the rebrand for Taylor Burrell Barnett which is explored further below.

The logo captured understanding and feel for the underlying principles and textures of planning, design and development. The elements of the land are open space, water and landscape. The fabric of human settlement are urban form, streets, gardens, bricks and mortar.

The logo was revised to recognise the change from Taylor Burrell to Taylor Burrell Barnett. The logo encapsulated a more elaborate arrangement and pattern of urban geometry, peri urban fringe and rural hinterland representative of the firm’s focus and skills.

Ken Cato had a deep understanding of the firm’s values, encapsulated in a simple handwritten note from Bill to Ken. Bill drew some sketches and enclosed them with a note to Ken, “Dear Ken, some thoughts on what TBB is About – SUSTAINABLE ENVIRONMENTS, regards Bill.” And that was the genesis of the brand that exists today. 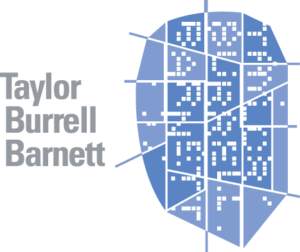 The rebrand embedded the firm’s new urbanist principles, the deep knowledge of the past and the culture and forms of successful places with the name Taylor Burrell Barnett, to represent a clear purpose for our planning and urban design work. 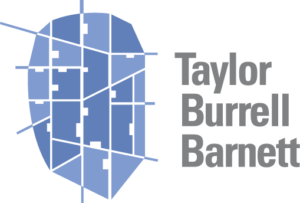 With an established brand and legacy of work spanning 50 years our logo has evolved but maintains the qualities of the past and introduces a contemporary and sensitive design.